For our second day in Vienna, we chose to take an excursion to Bratislava, the capital of the relatively new country, Slovakia, which was formed after the 'Velvet Revolution' and division of the former Czechoslovakia. Slovakia has apparently prospered since its creation. Our bus company, Blaguss, is a Slovakian company which won the contract in all of the EU for providing tour bus services for Scenic and its related companies. At 350,000 euros per bus, this is big business. We have been very happy with their services for the last week.

The first thing we noticed when travelling the approx. 70 km to Bratislava were the rows and rows of hundreds of wind turbines in farmers' fields as far as the eye could see. Lyle thought it formed an interesting line of defence for Austria.

Our tour of Bratislava focused on the old town which has been beautifully restored. Some of the houses have plaques indicating that a famous musician, e.g. Mozart and Liszt stayed in that building. Other plaques commemorate Jewish people who lived there but did not return after WWII. Here is the only old gate that has been preserved: 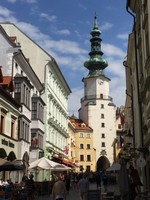 Apparently during the Communist years, the cobblestone streets were paved with asphalt but people found that it wasn't good as the water pooled at the base of the buildings and had nowhere to go, so when the Soviets left, the new government removed the asphalt and put cobblestones back on the roads to allow for more effective drainage. I'm sure glad I have my sturdy walking boots and that we've had dry weather. Cobblestones are a real exercise for the ankles, and wet ones are very slippery!

We slept on the bus while it returned to Vienna and unfortunately missed taking pictures of Gasometer, several huge old oil storage tanks that have been ingeniously converted into apartment buildings. The round exterior has been bricked and windows have been installed. Apparently it's a trendy, affordable place to live. If you Google 'Gasometer Vienna', you may find a picture of it and an explanation - if you understand German!

While we were enjoying dinner, we noticed city lights passing by and ran up on deck to catch a view of Bratislava's stunningly illuminated bridges. 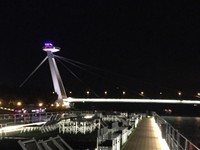 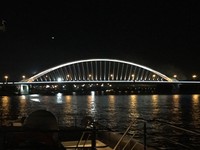 Posted by HosMiniTravels 14:05 Archived in Slovakia

Previous Next Table of contents

This blog requires you to be a logged in member of Travellerspoint to place comments.

If you aren't a member of Travellerspoint yet, you can join for free.